Analysing half a billion MOT records

What we found when we looked at the MOT history of over 62.7m vehicles.

Source of the data used

We analysed over 560 million individual MOT test records, from over 62.7 million unique vehicles to see if we could find any interesting data or trends. The data used in this analysis comes from the DVSA (Driver and Vehicle Standards Agency) who make the full MOT history database available for registered businesses and users to download.

This bulk DVSA MOT history data gives us a wonderful insight into vehicle usage and mileage fraud trends spanning over a decade. Our findings detail one of largest and most comprehensive analysis of the MOT data since it was made available in bulk format. The analysis highlights, more than ever, the need to get a full vehicle history check before you buy a used vehicle as there are so many data points to analyse now, it would be easy to miss some important history without one. We hope you enjoy our findings and if you have any questions or queries please do get in touch via email at enquiries@totalcarcheck.co.uk

Mileage fraud/Clocking is the act of reducing a vehicles mileage in an attempt to mislead someone as to its genuine mileage. This may happen in order to increase a vehicles value at sale, or to avoid paying extra as part of strict mileage limits imposed on new car finance deals such as PCP (Personal contract purchase).

Some very interesting figures came out of our analysis of the MOT mileage data. Firstly, we found 3.42m vehicles (from the total set of 62.7m vehicles) that had an odometer reading reduction (potential mileage fraud) from the year previous.

This is a means 5.45% of the vehicles in the data set showed a reduction in their odometer value, or 1 in every 18 vehicles.

The average number of miles an odometer would reduce over all 3.42m vehicles was 46,089 miles.

There were an additional 1.43m vehicles that showed a reduction in mileage but on further analysis appeared to be data input errors, see detailed analysis in our issues with the MOT data input methods. Suggesting there could be improvements made to the way the data is input during MOT tests.

We analysed both manufacturer and model specific data to build a picture of the vehicles most affected by mileage fraud. We looked a vehicles that had a recent MOT (2019 or 2020) to focus the results on vehicles currently on the road.

Vehicles manufactured more than 10 years ago are far more likely to have be subject to mileage fraud by reducing the odometer reading. 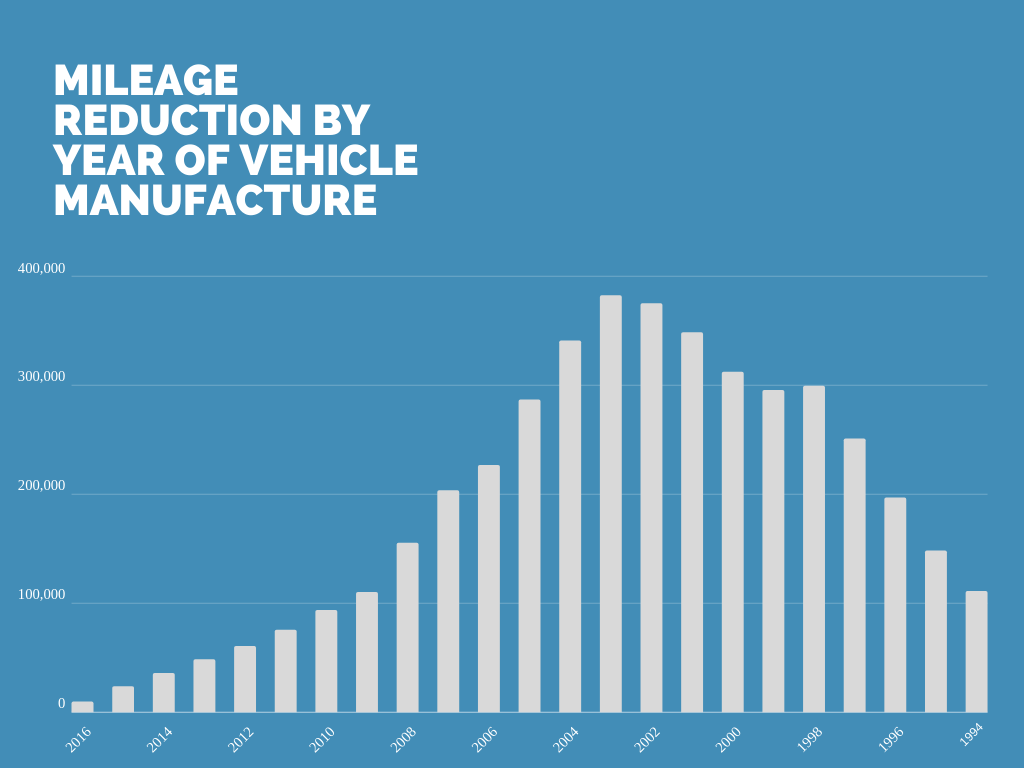 Below are the average (and median) mileages per year since 2007. It is interesting to see the general downward trend in average mileage, only to be exacerbated in 2020 so far with the consequences of COVID-19 on travel.

Issues with the data input methods

When the data was being analysed it became immediately apparent that the data contained some errors. This is expected, as the data is entered manually by MOT testers, and any manual entry of data will be subject to errors.

Generally, these manual input errors can be classified in one of two ways transcription errors (errors in pressing the wrong key or option) or transposition errors (entering data in the wrong order).

Nowadays MOT testers complete MOT tests on vehicles and enter the results electronically via the DVSA's MOT service, since 2015 the DVSA's MOT testing service has been used to record all MOT's, you can see an example of the system on the DVSA Matters Of Testing Blog.

We found two main groups of error when analysing the MOT data, the first one concerns what we expect to be a transcription error in most cases. We found a large number of vehicles (669,525, 13% of all mileage discrepancies) were flagged as having a mileage reduction but had their mileage adjusted by less than 300 miles. In addition to this we found the average level of mileage reduction below 300 miles was just 69 miles.

As the main objective of clocking/mileage fraud is to increase the value of the vehicle (or, more accurately, to prevent a reduction in its value), it is highly unlikely that someone would attempt to adjust the odometer to read less than 300 miles fewer miles as it would have almost zero effect on the vehicles overall value. These errors are small errors caused by incorrect entry by MOT testers, who often write down the vehicle mileage on a piece of paper when conducting the test, then enter the values on a computer later on.

You can see in the image below an example, where an MOT tester has accidently typed 69,124 instead of 69,134 to make it appear as though the vehicle has travelled -10 miles on the same day, when it was re-tested after an MOT failure. 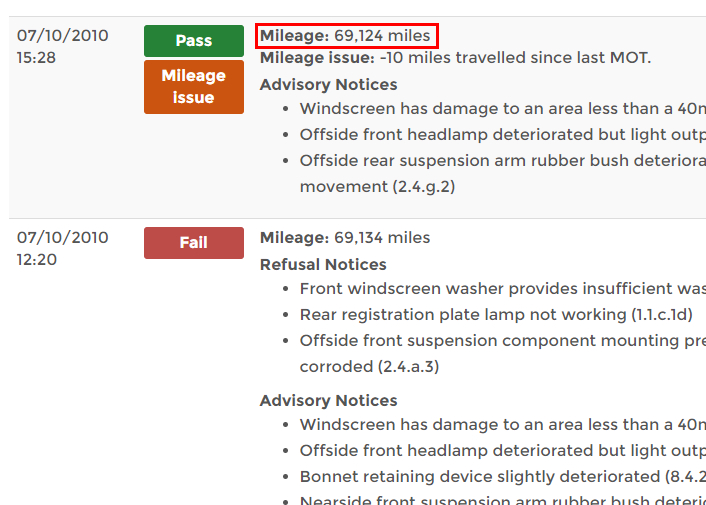 Generally, it is as simple as the MOT tester entering one to many digits into the odometer reading field for example, if the true odometer reading was 63,580 miles, but the MOT tester entered 633,580 miles (note the extra number 3), the vehicle appears to have travelled and extra 570,000 miles. A year later at the vehicles next MOT, assuming the correct mileage is entered, say 75,250 miles, it looks like the vehicle has reduced its mileage by over 500,000 miles.

We know that most modern vehicles have a design life of 150,000 miles, so can assume any vehicle appearing to have been 'clocked' by more than 300,000 miles is simply a mistake. You can see in the below image below an example, it is clear to see an MOT tester has entered an extra zero, they should almost certainly have entered 53,023 miles instead of 530,023 miles. 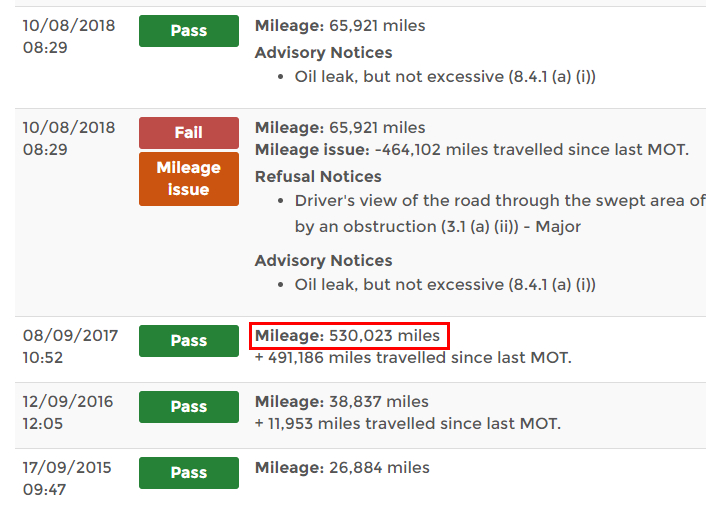 Mix of miles and kilometres in the odometer format

In modern vehicles, with digital dashboards, it is possible to change the format of odometer and speedometer from miles to kilometres, generally in the U.K we use miles as this is way our speed limits are enforced. Therefore, whilst possible, it should be rare for a vehicle to move from recording it's distance in miles to recording it in kilometres.

We noticed, when analysing the data that many vehicles would change the format of the odometer reading, this would often result in the vehicle appearing to be 'clocked', for example if a vehicle moves from 1000 miles to 1500 kilometres (932 miles) this is actually a reduction of 68 miles. We suspected, that in many cases MOT testers were simply selecting the wrong odometer format when recording the MOT result.

In order to test this we measured the total number of vehicles with a mix of odometer formats that showed a mileage reduction, this was found to be 626,820 (12.9% of all mileage discrepancies). To see if this issue was due to input error we ran an experiment and assumed all of the odometer formats were identical, we found that 81.3% of suspected mileage fraud cases would not be recorded as mileage fraud if the odometer formats were the same. To put this simply, it would appear in the vast majority of cases, these 'clocking' issues are actually input errors.

As you can see in the below image, an entry 81,209 miles makes the vehicle appear to have it's mileage reduced at its next MOT, when if it were recorded as kilometres, it would not. 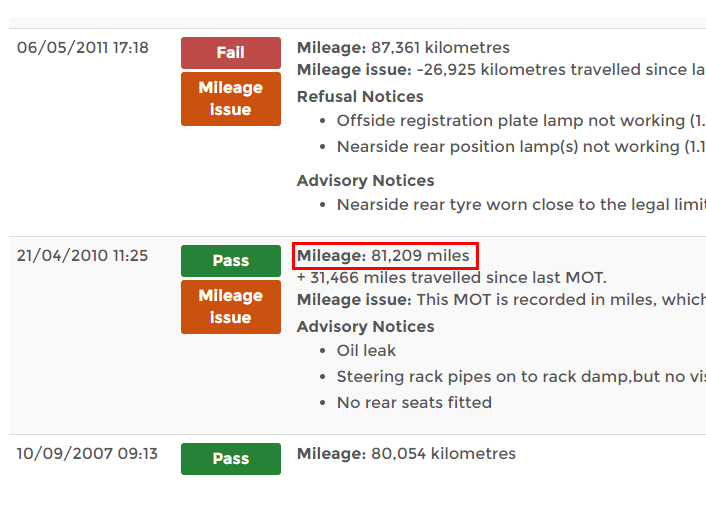 If you remove the entries explained above from the set of vehicles we found had mileage reductions between MOT's (i.e. Less than 300 miles, more than 300,000 miles and a mix of miles and kilometres that looks like a mileage reduction, but would not be if you assume the odometer format change was an input error), it would account for 29.5% of all records identified as 'clocking'. This level of errors is not uncommon when entering information once, one study showing that visual checking resulted in 2958% more data entry errors than double entry (see references 1 & 2 below)

How do MOT testers enter the odometer value?

We were lucky enough to be shown a demonstration of the MOT testing system, here is what the user currently sees when they have to enter an odometer reading (The vehicle we were using had 68k miles on the odometer at the last MOT): 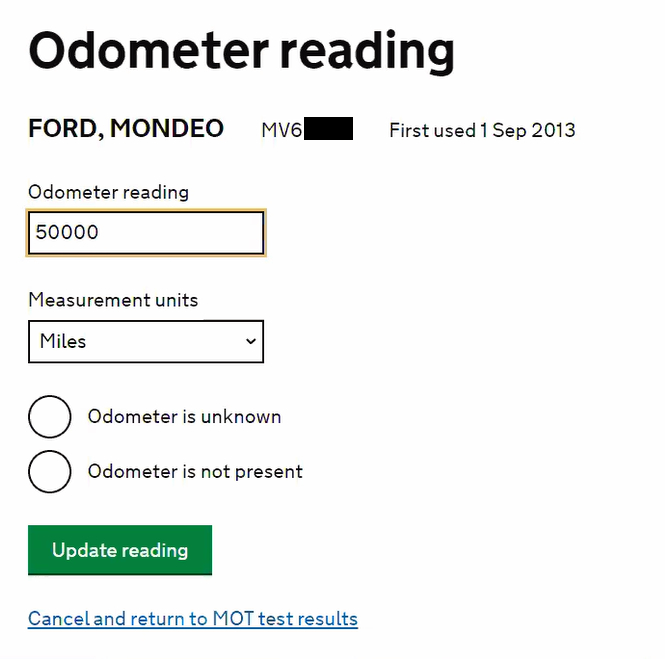 If a tester enters a lower odometer value, or a value significantly higher they are warned (it is quite small text, below the numerical value of miles), but, importantly, this warning only appears later in the flow, no warning is present on the page in which the odometer reading is entered. The tester has already entered the value and is likely moving on to other tasks:

There was no warning on screen if the MOT tester entered a odometer format that was different to the last MOT, i.e. going from miles to kilometres.

Once you move past the above screen, you are no longer warned about the odometer issues again, see the MOT summary screen here, this is the last screen before the results are saved:

It would appear, that with a few small changes (detailed below) there could be significant improvements in the data accuracy of the odometer readings.

Can the data be altered when it is incorrect?

The DVSA do have a process for fixing mileage issues recorded at an MOT, it is significantly easier to do if the issue is spotted withing 28 days of the MOT date, after which more documentation is required in order to enact a change.

Feedback to the DVSA

We fed-back all of our findings to the DVSA and made a few suggestions in order to improve the current system:

Hopefully these suggestions will help the DVSA reduce the transcription and transposition errors we have seen the MOT data.